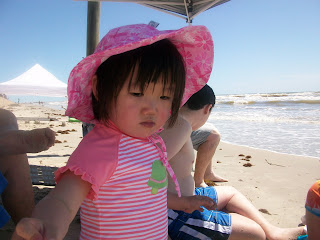 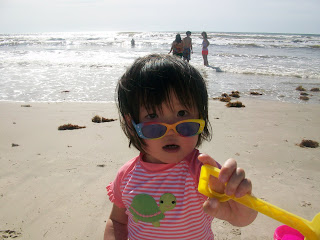 We went to the beach this past weekend and it seems that my girl, although a bit cautious, is a beach lover like her mama. Her favorite part of the weekend was shoveling sand and pouring water on it. I think she was amazed the way the ground sucked in the water so quickly. She had us all running for water the whole time. Now, walking on the beach, that took more time. The tide was high and it freaked her out. It wasn't until we were getting ready to leave that she attempted to walk along the waterline. Then she liked it a lot and had a fit because we were leaving. She is definitely in her twos! Holy cow! That girl is stubborn and wants it her way and if she can't have it her way, she has a major meltdown! And she doesn't let it go! I think she was that Chinese Empress who built the Summer Palace in another life. I heard she was a bossy firecracker like my girl! But, I wouldn't want her any other way, even if she likes to just punch my buttons by picking up random things and throwing them down.

The Cardiologist and Kiddie Park 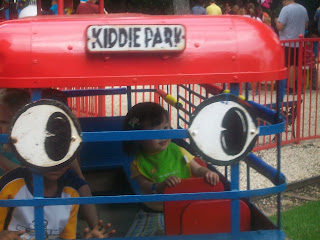 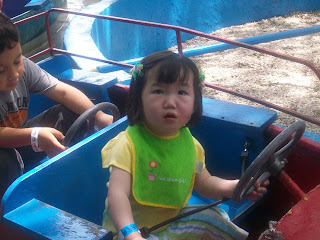 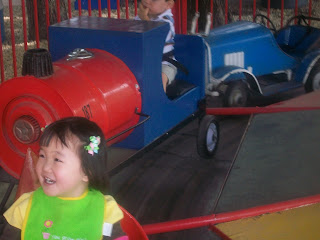 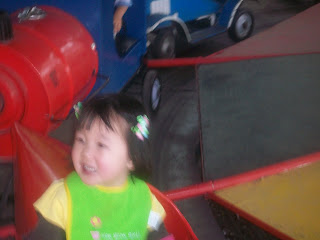 Last week was a week of good news. We saw the pulmonologist who said that she's doing great and we don't have to see him for three months. Grace did super well at that appointment and even let them put the blood pressure cuff on her. I think the doctor was shocked at her turnaround in behavior. Last time she wasn't having anything to do with him. She's that way with most doctors except our pediatrician who is AWESOME. Now, her visit with the cardiologist I could tell wasn't going to be great because she woke up in a bad mood and it seemed his nurse did too. She was grumpy with Grace and she had a hard time getting the EKG stickers on. Grace worked herself up and had a hard time calming down. The cardiologist had to stay in the hallway to get an accurate pulse ox. But, he's pleased and is planning on doing the Fontan the summer of 2011 unless her o2 sats fall in the low 70s (which they were before the pulmonologist visit). So, it was good news there too. Now we are going to visit the pediatrician because she has this nasty cough that started last Sunday and it's waking her up. She's choking on all of the drainage, poor baby. I'm constantly jumping out of bed making sure she's okay. This lack of sleep is also triggering her night terrors (and it could also be the change in classrooms too). So, needless to say, I'm also lacking sleep. She fell asleep this evening at 6:00 (usually she goes down around 8:30). I should be asleep but I'm trying to catch up on work stuff (I was out at TLA last week and had a blast...it was nice seeing the other librarians that I don't usually get to see and seeing cutie Matt De La Pena!)

Sunday we went to my friend's daughter's birthday party and Kiddie Park. Grace wasn't feeling super great but she was a trooper. She was leery of the rides at first but I was proud that she tried them and she actually enjoyed them. I felt so bad when she wanted to get on the "bus" that kind of went fast. She wanted to get on and I made sure she was strapped tight. Her eyes were huge as it whipped around the corners and she had a death grip on the seat in front of her. I waved at her as she went by and kept yelling "You're doing great!" I don't think she'll ever think of the song, "The Wheels on the Bus" in the same way.

We saw the pulmonologist and the cardiologist this week. Both doctors had good news for us. Grace is doing well. She does have a nasty cough though. Most likely we'll go on antibiotics this coming week. It looks like she'll have her second open heart surgery next summer (2011) if her oxygen saturation levels remain where they are. If they drop then we'll be doing it sooner. She did very well with the pulmonologist but not so hot with the cardiologist behavior-wise. I don't think my cardio's nurse was feeling too hot and she was super grumpy with Grace while attempting the EKG. Grace woke up in a foul mood that day too and I know that didn't help. I wish they could understand that first of all she's only been here for 10 months and in that time she has had open heart surgery, lots of blood taken, tubes in her ears, and lots of other scary things not to mention having a brand new family to deal with...it's gonna take time and be patient with her. Geez and she's only 2!

Speaking of 2, she likes her new class and she peed in the potty in class and for me today. YEA! Baby steps right? We're going to go to the beach next week. I hope it's not raining!

Going into the 2 year old class

Grace is going to start visiting the 2 year old class and you know who's nervous? Me! It's a great class with a great teacher but I love the teachers she has now. But, I do know she needs to be with the kiddos her age, especially to help her with her speech. She does have a lot more words than before but she's not really putting them in sentences. I know that will come with time.

We got good news from the doctor that she does not have malrotation of her stomach! YEA! She does have her gastrointestinal organs flip flopped (except for intestines, I think). This won't be a problem but she'll have to wear a medical alert bracelet. Her o2 saturation levels have been great too. We are going to see the pulmonologist and cardiologist this coming week. I'm hoping he will give us approval to fly. Maybe we can visit Leilani and Lillwinn (the cribmates) this summer. 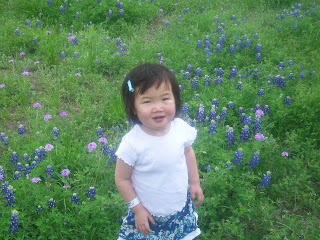 One of the reasons I love Texas in the Spring...beautiful bluebonnets and other wildflowers. 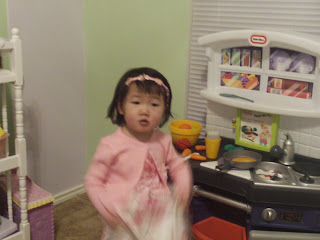 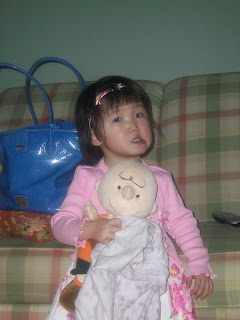 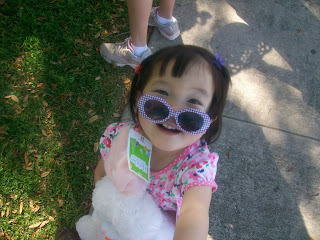 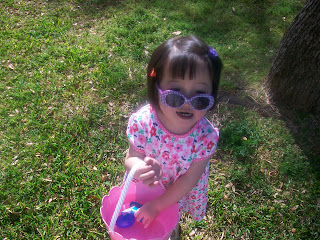 I turned 38 this past Tuesday and I had a great day. I have to say that I have the best friends and family ever. Even though I had to go to the doctor because I hadn't gotten better and I ended up with a steroid shot, it was a marvelous day. I remember last birthday I couldn't wait to get to China. I was waiting for my LOA and I was hoping it would be my birthday present. I think it was dated on my birthday but I didn't get it for like another week. How much my life has changed in one year.

Grace celebrated her first Easter. She is SUPER afraid of the Easter Bunny. When we went to the Easter egg hunt yesterday, she saw the bunny and stopped in her tracks. She clung to my leg. The funny thing is that she loves her bunny named Bunny Hop. She had fun at the hunt and got some candy and won a, you guessed it an easter bunny which we have named Fluffy in the drawing. She had fun dyeing Easter eggs and making a bunny cake with her cousins. Today we went to 8 a.m. Mass and she did okay until towards the end. It's hard to enjoy Mass with a two year old who is in constant motion. She kept hugging my neck and kissing me which made her constant motion a lot easier to take. We went home and took a nap and went over to my parents' house for lunch. It was a nice laid back day. Grace loved the kitchen the Easter Bunny left. Can I say how hard some of these things are to put together? Lord I needed to be like Arnold Schwartenegger to put on the refrigerator and oven doors!

Tomorrow we are scheduled to do an Upper GI. They were going to do a CT of her chest but because her SATS are not the greatest, they didn't want to do it (because she has to be sedated)...so my doctor is checking out other options. Let's hope it goes well tomorrow. I feel bad for her because it seems like it's doctors and lab testing lately. I figure in the next couple of years she'll be all fixed up and good as new. I am glad we're figuring out things now rather than it blindsiding us later on down the road.