I had such a great time this evening at the lighting of the tree in Alamo Plaza.  What an amazing opportunity we had to be part of it.  Thank you so much to Make A Wish and HEB.  They are the best.  The other young lady who also helped light the tree was such a sweet girl and an inspiration.  She took my breath away with her zest for life.  She just had some major surgery and she was smiling and having a blast.  It's small things such as this that make me realize how truly precious life is and how blessed I am.  I have pictures of the event and I will be getting more from Make a Wish so I'll post them.  Grace did cry when she saw Santa but calmed down when he sang Jingle Bells with her (I told her that she said she wasn't going to cry but she still kept on crying).  We also found out that HEB has indeed adopted Gracie's wish.  We are so thankful to them.  I was so overwhelmed by their generosity that I really felt like crying.  Gracie not only got to ride in the carriage with Santa, she got a cool ornament that is hanging from the tree in Alamo Plaza that has her name on it, a gift bag from Radio Disney that was Tangled themed (she LOVES the doll with the super long hair), a $50 gift certificate to HEB and just the coolness of being part of that ceremony and the afterparty.  It was an experience I will NEVER forget.  On this post Thanksgiving Day, I have even more things to be thankful for.

Gracie has been healthy for a month...knock on wood, Thank God!  It does wonders for her mood, for the most part.  We went to her school (me and dad) to eat Thanksgiving lunch with her.  My intentions were to leave her there to take her nap and get stuff done but she gave me the sweet face and said, "I wanna go with Mama!"and of course I folded and brought her home.  Most of her friends had left and I didn't have the heart to leave her.  She was so good when we got back.  I helped my parents take some things to Goodwill, bought 2 pies at Sam's and came home to clean the downstairs and wash the dog.  Gracie stayed out of my way when I vacuumed and mopped ad she "helped"/watched me give Hope a bath (she stunk!)  That's another great thing about this age, they want to be helpers.  Grace really is a great helper.  She helps unload the silverware from the dishwasher.  She helps put the wet laundry into the dryer and take the dry clothes out of the dryer.  She likes to hand me the hangers to hang the clothes.

I am cooking tomorrow and bringing the food (well, I'm making beans and the turkey breast this year) to my mom and dad's house.  We'll spend the day with them.  Friday we'll be lighting the tree in Alamo Plaza (well, Gracie will be using her "wand" with Santa).  It's an exciting week.  If it's on the news I'll post the link so you can see.

I was re-reading a post from last year when I wrote about 10 things I had learned about Gracie.  So, I thought I would make an updated list about Gracie age 2 1/2 going on 11 (actually 3 but it seems like she's trying for 11)...

1.  She has a great belly laugh and she likes to laugh especially at silly things
2.  She's obsessed with the moon
3.  She likes to watch airplanes in the sky
4.  Her favorite thing to eat is hot dogs and to drink, Sprite
5.  She likes to hop, especially down the stairs
6.  She has to always have a blankie...her polka dot one is her current favorite
7.  When you tell her she's silly or a turkey, she says, I no whatever, I Gracie.
8. Elmo, Yo Gabba Gabba and Max & Ruby are her favorite characters
9. She isn't much into desserts, mostly vanilla ice cream
10. She loves stickers

I can't believe that in a month, well a little over a month, she'll be 3.  Time has flown by.  I wonder what she'll be like at 3.  She's constantly growing and changing.  Before I know it, she'll be in school.  All I know is that knock on wood, we've had a healthy 3 weeks (Thank you God!) and I pray it continues.  Next week I'm off and she'll go to school 3 of those days.  I plan on going to see Harry Potter, get some shopping, cleaning and work done.  We'll see...it seems it never works out the way I plan.

I think it' s back on

We met with the pulmonologist today for our follow up and we discussed the tonsilectomy.  He feels strongly that we should and I really respect his opinion so I think I will be scheduling it for the Christmas holiday break. My poor girl will be so uncomfortable for 2 weeks but in the end it should help her be healthier for her fontan in the summer.  Her strep test came back negative which shoots down her cardiologist's theory that maybe she's a carrier...so it looks like it's a go.

A good thing that happened today is that my Gracie gets to help Santa light the tree in Alamo Plaza a week from Friday.  It's a big deal.  She was chosen because she's a Make A Wish kiddo and she gets to ride on the sleigh with him.  I'm super stoked but hoping she doesn't freak out on seeing Santa like she did last year.  I'm trying to prep her now.  I need to find pictures of him so she knows who he is.  So, next Friday night, my girl might be on the news but in a good way!  I think this is going to be another great family memory to put in her lifebook.

We had a rough start this morning after almost two weeks of bliss...my girl has been healthy and happy...healthy is the best part.  Anyways, I was rushing her to get ready.  She was watching Max and Ruby while I was getting ready for work.  She decided she didn't want to put on any clothes so I had to manuever her to get her clothes on.  It was like putting clothes on a fish flopping on a dock.  She was screaming the whole time so I turned off Max and Ruby.  She calmed down enough to get her hair brushed and fixed and downstairs.  She sees the leftover cheese on the table that I was too tired to clean up and she decides she wants shredded cheese to eat.  I offer a cheese stick.  NOPE, that won't do.  Tears start flowing and then the mouth opens with the "WAAAAAAAAAAAAA!"  I close the fridge and tell her it's either the cheesestick or nothing, then she throws up the "I WANT HOT DOG!" in the crying wail.  We are running late, I have a 7:30 meeting and it's 7 and I still have to drop her off at school.  I get her the hot dog.  Because she has been a bratasaurus, no Max and Ruby in the car.  That starts off another meltdown.  I have told her in the past that when she stops crying and calms down I will listen.  She's screaming at the top of her lungs she wants Max and Ruby and I'm telling her she needs to calm down then I can listen to her.  I'm saying it at a low, calm tone.  She stops crying but screams at me, "MAMA I CALM NOW!" Yeah, not so much.  I can laugh at it now and at the time, I didn't think it was so funny.  It wasn't until I was retelling the story to a teacher at my meeting when I heard how funny it was.  I can only imagine what our arguments are going to be like when she becomes a tween or teen.  I think I might need to get a precription for valium now!

But, other than that she has been doing well, knock on wood, Thank God.  The second opinion really helped and her cardiologist wants another strep test while she is healthy.  We'll talk to the pulmonologist on Monday.  I'm praying we can put off the tonsil stuff for a year or so because it's incredibly painful at her age and I don't want her to have another painful surgery.  I'm praying she does well this winter and her heart keeps on pumping strong so we can have surgery this summer.  She amazes me every day with the progress she has made.  She has come a long way. 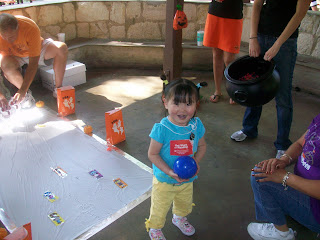 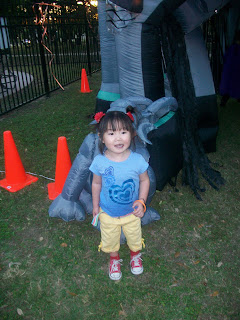 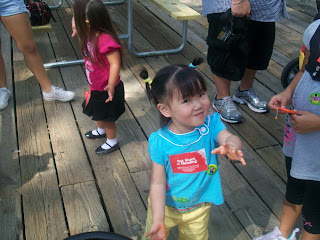 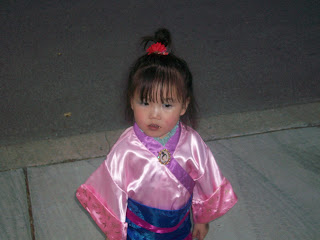 I've been wanting to blog but it seems that I've been falling asleep next to my Gracie before I can get to it.  Last night, poor Hope ended up spending most of the night outside because she didn't want to come in when I was getting ready for bed last night.  I had every intention of going downstairs and letting Hope in after I had watched Mike and Molly and Children of the Paranormal that I had recorded the night before, but I fell asleep during Children of the Paranormal.  Poor Hope is afraid of thunderstorms and I heard that it rained pretty hard around 11 p.m.  I woke up at 2 a.m. when I heard the cold front coming through and I let her in.  She looked at me like I was the meanest owner ever.  I told her, "Hey, if you came in like I asked you to the first time, you wouldn't have been stuck outside for so long."  I remember the days when Hope's safety and comfort were priorities for me...now not so much.

So, on the Grace front, I am currently dealing with whether or not to take out the adnoids, tonsils and put in a ear tube.  We are getting a second opinion next week and I'm weighing in the pulmonologist's opinion (and cardiologist...now that I think about it he hasn't called me back! NOT COOL!)  I know a lot of people think it's a slam dunk sort of thing  to help cure her issues with strep throat but when you have a heart kiddo, you have to be more cautious.  This procedure would have her in ICU at the end, not coming home.  It's precautionary but it's PICU!  The whole idea of PICU gives me the willies.  We'll be there this summer for a few days so I really don't care to see it sooner.  The other thing is that the procedure would be done at another hospital...the one that gave me someone else's meds and an EEG when I had the chicken pox (yeah, didn't need the brainscan...someone else's)...so I'm a little leery.  I'm taking my time making this decision and making sure all of her doctors are on board.

Halloweeen was a fun time for Gracie and her cousin Brennan.  They went trick or treating around his neighborhood.  It was incredibly hilly and she walked most of it.  She wouldn't let me hold her.  Finally at the end of Brennan's street, she asked me to pick her up.  I did.  I was proud of my little Mulan.  Yep, that's who she dressed as. On Saturday, I dressed her as Kai-Lan because she likes wearing her hair the Kai-Lan way.  When she has her hair that way she says, "I no Gracie...I key-lan."  Crazy girl!