Hoping to go to CHOP this year

My girl is doing pretty good.  We have noticed that she does poop out a little faster than before and that she has been having more blue lip days after a lot of activity.  We aren't quite sure why.  She will be having a heart catherization done sometime this year.  Other than that, she really is doing remarkable well which is a good thing.  I am trying to get us to CHOP (children's hospital of philadelphia) because they have a single ventricle survivorship program.  It is multidisciplinary which means it's a team of doctors (GI, cardiologist, etc) who do their tests, talk about her as a team and then talk to us.  I love this approach (it's like middle school teaming which I highly recommend).  I just want to be proactive about her health, especially when it comes to the other body systems.  We heart parents tend to be cardiac centric which is good but when you change one body system, you affect the others because our systems are so interconnected. I read this article that basically said we are letting our heart kids down by thinking the fontan is a fix. It is in fact palliative which means it's temporary, like a band aid...it isn't a cure.  It was hard to read that 1 in 4 or 1 in 5 fontan kiddos don't make it to their 20s. I knew it, but didn't...it's like the elephant in the room...nobody wants to tell you the reality but it is staring at you in the face.  I think that is why I have embraced the carpe diem attitude with my girl.  We literally do have to seize the day because we don't know when something could happen.  I mean it could happen to any of us but with my girl I know that we most likely will have a limited time in comparison to other kids her age.  However, we don't plan like it is.  We were talking the other day of children.  She wants to be a mom.  She said she was going to be a mom and her friend, D was going to be a dad but they weren't going to be married.  I asked her where the child was going to live and she said they were going to share and live next door to each other.  She also said that when I get too old she'd drive me around as long as I teach her to drive first.  I made her pinky promise that when I get old, she was going to take care of me and not throw me in an old folk's home.  She said we were going to live together forever.  That should be interesting when she's in middle school.  I should record it and play it for her then. 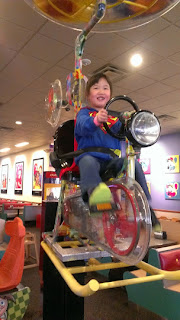 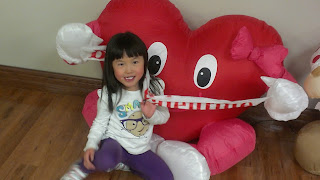 Today, more than any other day, I stop to remember my sweet girl's beautiful heart.  She has had a great and   healthy year so far (knock on wood).  She did have to get two cavities filled (without any anesthetic...she's so tough...she's my hero!) and a crown (done with a little gas) a couple of weeks ago. I'm so thankful to all of the wonderful family and friends and medical peeps who have really helped us these past several years.

We did see the cardiologist the other day and he said everything looked great.  Our concern right now is that her stamina level has diminished and that she gets blue lips after major exercise and she struggles going up a second flight of stairs in our house.  This started around the Christmas holidays.  It looks like there is going to be a cath soon but we are also trying to go to CHOP (Children's Hospital of Philadelphia).  They have a single ventricle program that would really be beneficial for us.  The kicker is whether or not my insurance (an HMO) will help defray the costs.  I am just going to put it in God's hands and He always figures something out for us.  I'm not worried. 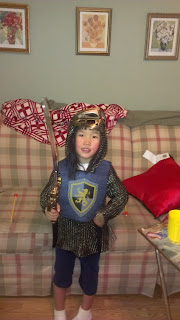 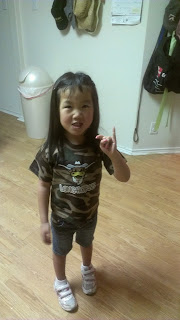 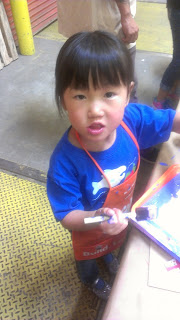 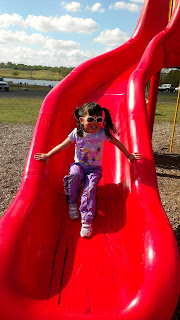 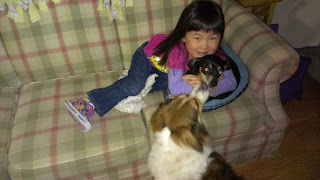 I haven't blogged in a LONG time.  It's not that I haven't had a lot to say. I have been just kind of flying under the radar, staying to the mantra of "Keep Calm and Carry On!"  Life really hasn't been super crazy.  We had a great summer and took a nice beach vacation.  We've stayed relatively healthy (knock on wood). Our school year started without a hitch.  Gracie loves Kinder Ready.  She can't wait to start Kinder next year.  She turned 5 in December and is growing so fast. It's crazy what oxygen can do for a person.  We got a new family member in late December.  A little 4 yr old dog named Peppa who G loves!  Things really seem to be on an even keel for once.  Of course, I say that as I wait for the cardiologist to call me about G's liver function test results which I know are still going up.  I'm not quite sure what will be the outcome or result.  But other than that little bump, life is good.  I'm thankful that I'm not in a hospital with my daughter.  I'm thankful we're home and happy.  G can play outside with her dogs and can has the energy to run around and climb the playscape at McDonalds and Chuck E Cheese.  Really life is good.