Grace now is in her big girl toddler bed which is super great right? Well, there is the problem that now Miss Thang can get out of her bed on her own accord, especially at nap and bedtime. At first we didn't have this problem because she didn't realize she had the power to do that. But now, she knows she has the power. It was getting into a major power struggle which I know isn't a good thing. I've done all the Love and Logic classes, read books, etc. I dealt with these things with middle schoolers for over 14 years now and I have learned my daughter can outlast them...she is one of the most tenacious people I have ever met in my entire life. It's like a no win situation. When we have the power struggle it ends in major temper tantrum/screamfest which leads to a bad night sleep. So, by accident I solved the problem but at the same time, I feel like a slacker parent. Let me explain. So, it was getting to be 9 p.m. Grace was popping out of her bed like a weed. I'd put her down. We did our whole nightime routine...lotion, pjs, books, prayer, music, back rub...she still wouldn't go down. I was so frustrated. I walked downstairs. Came back up because I felt incredibly guilty for the screaming even though I was still talking to her telling her where I was. So, I ended up laying on my bed, turning on the TV and watching one of my TV shows...guess who fell asleep shortly thereafter? Naptime on the weekends is the same way so I put on Yo Gabba Gabba and tell her we are going to rest watching the show. She falls asleep and I guess it's because she has seen these episodes like millions of times. Her sleep is for more than an hour and it's restful. So, putting on the TV before she falls asleep is becoming a routine. I feel like it's probably not the greatest thing but it's working for us. She's falling asleep in a peaceful way and she's staying asleep peacefully and getting up refreshed and in a good mood. I know some people would totally frown on this but it's working for us right now.

Here is the one thing I am learning about motherhood that I didn't get before. You have to try and do some things that others disprove of and that's okay. So, I have a lot more understanding of moms and dads now parenting in unique ways. I used to be very judgemental before but now I get it. 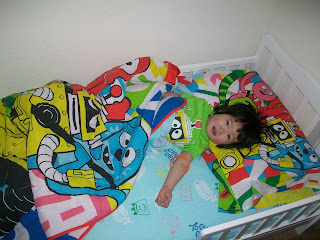 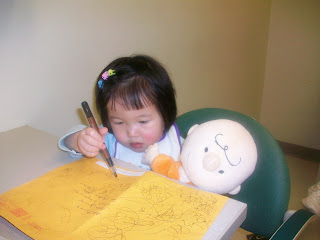 Yesterday we went to see the geneticist about the extra x chromosome. I was kind of overwhelmed with the amount of information. The bottom line is that she's going to have to have more testing done. She was concerned about her organs being flip flopped, specifically the stomach so now we are going to have to have possibly an upper GI. So, at this point, we know there is an extra pair but we are not totally sure how it is affecting or if it will affect her.

I hated the fact that they had to draw more blood. It was painful because the tech was digging around my poor girl's arm looking for the vein. Finally the nurse came over and got the blood. My poor Gracie was crying and crying and crying. Charlie Brown, her new friend, couldn't make her feel better. She fell asleep on the way home.

She is still sleeping in her big girl bed, though she falls out of it at least once a night. Last night I woke up and found her on the floor asleep next to her bed. Earlier that night she was standing up beside her bed with her arms outstretched yelling, "Mama! Mama! Mama!" I picked her up, rubbed her back, kissed her and put her back into bed. She had been asleep the whole time. She is now letting me comfort her whereas before she was so distraught nothing could calm her down. We have noticed that she's smiling and laughing more. I think part of it is because the saline nebulizer is working and the weather hasn't been rough on her o2 sat levels.

Today is my mom's birthday. Happy Birthday Mom/Grammy. We love you and thank you for all the things you do!

Yep, my daughter used the "N" word today for the very first time. I had used it with her about 15 minutes before she used it when she was trying to stick her nebulizer tube in the outlet that I had just unplugged the nebulizer from. She decided to try out her new word when she was going to bed. She popped up and said loudly,"NO!" and then she liked how good it sounded that she continued, "No! No! No!" I don't really think she understands what it means but I think that's just around the corner. I think it's going to be a word that I'll be hearing a lot. She is very stubborn and she wants things done HER way. She throws major bratasaursus fits when it doesn't happen the way she wants it to.

On a brighter note, my daughter is sleeping in her big girl toddler bed. This is night #3. She hasn't fallen out of bed (well half of her has but she stayed in bed).

I admit that before Grace, my car was not exactly always spic and span. You would think that because my job requires serious organization that I would be extremely organized....yeah, not so much. I can though give the general dewey decimal number for most things. Anyways, I realized today that having a 2 year old increases the disarray in a car. The reason I found this out is that I had to pick up the author we were hosting from his hotel this morning. It took me a good long time to pick up all toys, straws, old capri sun pouches, books, papers and then vacuum the car. Let me tell you, there were cheerios and m&ms all over the place not to mention a half naked Ling doll on the floorboard of the back seat (poor Ling!) You know what the sad thing is? I have an organizer for Grace's stuff hooked onto the back of my seat. It obviously isn't working for me. The good thing is I was able to get it cleaned up so that Rick Yancey (our author) didn't sit on boogie wipes, m&ms or any other trash. It looks clean but I highly doubt it'll last much longer. Oh well. Que sera sera. 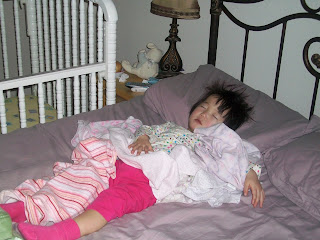 My grandmother's funeral and rosary was lovely. I was glad to see all of my extended family. Some of them hadn't met Grace. She did so well despite the later nights and missing naptime. Of course though, the nasty wind blew in which affected her oxygen levels. I almost thought we were going to have to make a run to the ER because it wouldn't stablize despite nebulizer treatments. Luckily, it finally did get to where we needed it to be by 1 a.m. and it stayed like that for the rest of the night. I'm glad I only had to do 2 treatments.

Of course, it doesn't end there. Gracie and I got up this morning. She is now into Blue's Clues as well as Yo Gabba Gabba. She watched the show as I gave her the pulmocort nebulizer treatment. We were both able to get dressed and I was able to give her meds before we left for school. I should have known that she wasn't feeling so great because she didn't fight getting buckled into the car seat (that is now our big hurdle sometimes) and she let me start the Sesame Street CD at the first song and usually we have to start our trip with Rubber Ducky. When we got to school, poor thing just threw up and threw up and threw up. I wiped her up as best as I could and we headed back home. I cleaned her up, put her in new clothes, took her temperature and she was fine. I guess it was the combination of mucous and meds doing a mambo in her belly that didn't agree with her. I took her back to school and all was well. We had a great evening and she seems to be feeling better.

So, I started thinking about Grace and all the stuff we've been through healthwise which led me to start thinking about an e-mail from my agency about waiting child and the policy that only people with LID dates could apply for children with minor special needs such as CHDs or cleft lip or palate...minor...it's the word "minor" that I'm not so sure about in the same sentence as CHD (or any other special need). I hope that people realize that even if they only want a "minor" special need, it doesn't guarantee that it will be. There could be other things related that aren't documented that the parent will have to take care of as well. Grace's SN was supposed to be moderate but in fact it's severe. We've also had other health issues related such as pulmonary issues. I just hope that when people do decide to go the special needs route to be prepared for the unexpected and that there might be a lot more to the special needs that meets the eye. Don't get me wrong. I am glad that I did go this route and I am Grace's mom. I have learned so much and have gained so much from being a parent to a special needs child. It's incredibly challenging not only because of all of the things we are currently juggling healthwise, but also because I am doing it as a single mom (with help from family and friends). I just want people to go into the experience with eyes open and not feeling like the rug was pulled out from underneath them.