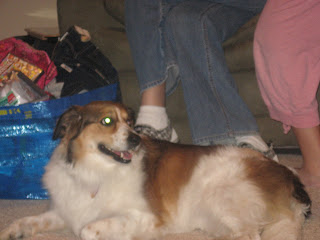 Hope and I had Day 2 of obedience class. She is doing very well. We worked on heel, change of pace, sit and heal/sit. She also was the "demonstrator" of the bad behavior of jumping up on people and she got the "off" command and the water bottle squirt. She totally stopped. I am going to practice that command and hush when she starts the crazy dog bark. We're working very hard so she doesn't freak poor Grace out.

Today was also our DDR tournament at school. I think I got permission to buy a wii for the library because you should have seen the amount of kids in the library during lunch. The interesting thing is that I had more boys cometing than girls. Two of my first place winners were boys! I want to do game day after school either once a week or every other week next year. I want to do more than Wii. I was also thinking scrabble and monopoly as well.

In a little over a month I should be in China. How crazy is that? I am so excited!